Dear members, readers, writers, and artists: thank you so much for participating this year for the 2020 hp drizzle fest. Below is the full masterlist! I know that this hasn't been an easy year for any of us - and I hope this little fest that we all worked so hard to produce brought some *joy* in *your* life ♥ Please remember, it's never too late to show a creator your love. 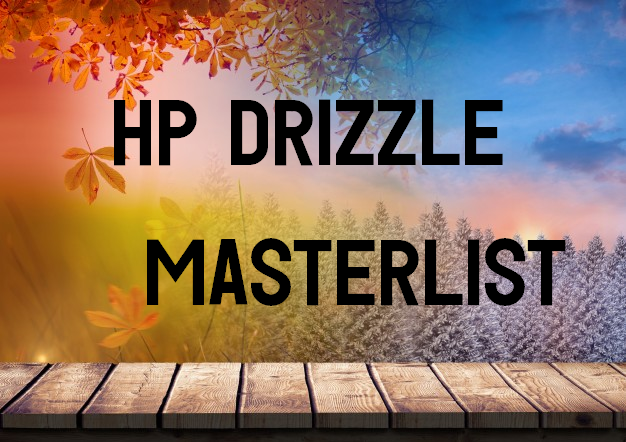 If there are any mistakes please comment below or let me know via email. 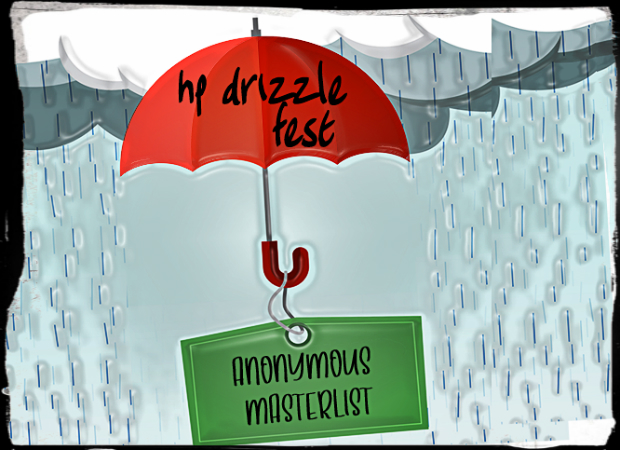 Thank you for all your support. Reveals / Final Masterlist will be posted on Saturday, 10th October. 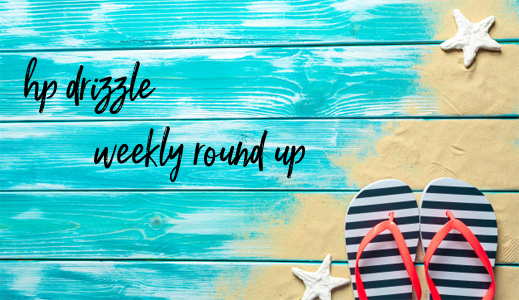 OMGGGGGGGGGGG YOU GUYS!!!! We are finished with the FIFTH WEEK of DRIZZLE 2020. We made it! 🎉
Check out the fabulous entries below - and give them ALL THE LOVE.

So what's next, you ask? Let's see, today's 4th October - so I'll be posting the ANONYMOUS masterlist by Tuesday of this week (6th October) and reveals will go up on Saturday, 10th October! Sound good? SOUNDS GOOD!

I want to give all my love and appreciation for our 60+ authors/artists that have been waiting PATIENTLY for their story / art to go up and then the reveals. Especially those that submitted as early as May (!!) and June (!!) and July (!!). I know it's been a long journey and your hard work is much appreciated by me and all the members of the hp drizzle community!

Title: Let Him Be Kind
Author: savant (teii)
Prompt: # 120: Draco's house is haunted. The ghosts are normally well behaved, but the stormy weather has upset them. Harry is called into help get them under control
Pairing(s): Draco/Harry
Word Count: 11200
Rating: T
Warning(s): Past Child Abuse, Past Child Illness
Disclaimer: No profit is being made, and no copyright infringement is intended.
Notes: Thank you so much to my beta K for essentially holding my hand throughout the entire writing process and all the galaxy brain suggestions. Absolute legend.
Summary: A ghost is haunting the halls of Malfoy Manor, wailing at all hours of the day. Unfortunately for Draco, the only person to happily offer their ghost-be-gone services was none other than Harry Potter.

(Let Him Be Kind)

Title: what the rainbow never tells me
Author/Artist: glittering_git
Prompt: # 125
Pairing(s): Teddy Lupin/James Sirius Potter
Word Count/Art Medium: ~6.5k
Rating: T
Warning(s): None apply
Disclaimer: No profit is being made, and no copyright infringement is intended.
Notes: Thank you so much, grace, for this prompt! I hope you enjoy it :)Thank you to my outstanding beta, M, for helping me put this fic together. Thank you to the wonderful HP Drizzle mods for all of their hard work, and for being kind enough to grant me an extension. It was such a joy to write for this fest! Title is from Emily Dickinson’s poem of the same name.
Summary: When James is challenged with an impossible task—to find the pot of gold at the end of a rainbow—no one expects him to succeed. But what they don’t know is that James has a pretty good in with England’s premier Weather Wizard, Teddy Lupin.

(what the rainbow never tells me)

Title: Funny Weather You're Having
Author/Artist:

cryptaknight
Prompt: # 50
Pairing(s): Zacharias Smith/Luna Lovegood
Word Count/Art Medium: 3600
Rating: PG
Warning(s): Mention of character death
Disclaimer: No profit is being made, and no copyright infringement is intended.
Notes: Thank you very much to K, for both the beta and for cheerleading right up until the very last minute.
Summary: Zach notices a strange weather pattern around Luna's house, and decides to investigate.

(Funny Weather You're Having)

goddess47
Prompt: #4 - Hot summer nights
Pairing(s): Harry Potter/Severus Snape
Word Count: 12,300
Rating: PG
Warning(s): slash, mpreg
Disclaimer:Harry Potter characters are the property of J.K. Rowling and Bloomsbury/Scholastic. No profit is being made, and no copyright infringement is intended.
Notes: Many thanks to

melagan for her help and hand holding to get this done!
Summary: Severus was mostly there for the air-conditioning. He didn't know it would change his life!

digthewriter
Prompt: SELF | But the universal theme of 'rain on your wedding day'
Pairing(s): Luna/Ginny
Word Count/Art Medium: Digital
Rating: G
Disclaimer: No profit is being made, and no copyright infringement is intended.
Summary: Rush out in the rain to be soaked with the sky. - RUMI 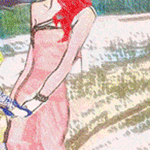 (Rain On Your Wedding Day)

Title: Corazón De Mi Alma
Author/Artist: nightfalltwen
Prompt: # 56
Pairing(s): Harry/Hermione
Word Count: 10800 ish
Rating: R
Disclaimer: No profit is being made, and no copyright infringement is intended.
Notes: Happy Drizzlefest! Special thanks to DG for the plot idea. Big loves when I know it's not your ship, I truly appreciate the help. ;) Also to GFA for helping me sort through some slang (which I ended up not using but it was helpful anyhow!) and of course forever loves to L for beta work. Title is google translate.
Summary: Harry and Hermione travel to Mexico for the repatriation of a cursed Mayan artifact.